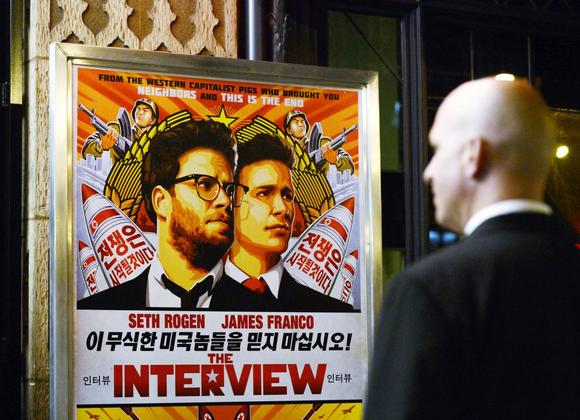 A security guard stands at the entrance of United Artists theater during the premiere of the film ”The Interview” in Los Angeles, California December 11, 2014.

(Reuters) – Washington made the woes of cyberattack victim Sony Pictures its own on Thursday as the White House acknowledged that the devastating strike against the big Hollywood studio was a matter of national security that would be met by a forceful government response.

But the White House was not ready to put the blame on North Korea, despite a U.S. official’s indication on Wednesday that Washington may soon formally announce the involvement of the Pyongyang government.

President Barack Obama was monitoring the cyberattack very closely, White House spokesman Josh Earnest said. But even as the White House studied a “proportional response,” experts warned that the effect of strategies like cyber retaliation or financial sanctions could be limited.

The attack more than three weeks ago by hackers identifying themselves as “Guardians of Peace” is the biggest hacking of a company on U.S. soil and might be repeated with other companies.

It brought down the computer network at Sony Pictures Entertainment, prompted the leak of embarrassing emails, and led to a film cancellation that many in Hollywood and Washington said was tantamount to caving in to the hackers.

Sony decided on Wednesday to scrap its big Christmas Day release of “The Interview,” a comic film that culminates in the assassination of North Korean leader Kim Jong Un, a scene that was leaked on the Internet on Thursday.

Sony pulled the film after movie theater chains said they would not show the film citing security concerns after hackers made threats against cinemas and audiences.

A senior North Korean U.N. diplomat declined to comment on accusations that Pyongyang was responsible for the hacking attack on Sony Pictures.

NBC News reported on Thursday night that U.S. officials believe the attack was launched in North Korea and then routed through servers in Taiwan to take advantage of faster computer circuits. Reuters could not verify this report.

After the cancellation of “The Interview,” Sony began pulling promotion of the $44 million film, dismantling the giant promotional billboard on Hollywood’s famed Sunset Boulevard on Thursday.

Some of the Hollywood’s biggest names howled over the cancellation of the film starring James Franco and Seth Rogen, the latter also a co-director on the movie with partner Evan Goldberg.

Steve Carell, who has starred alongside Rogen in numerous comedies, said: “Sad day for creative expression.”

The hacking could hit Carell more directly. A film project called “Pyongyang,” a paranoid thriller starring the actor that was to be set in North Korea, was scrapped by producer New Regency, Deadline.com reported.

Neither Rogen nor Goldberg would comment on the fate of their film amid grassroots efforts like screenings and petitions to keep the movie alive and honor the filmmakers.

The Alamo Drafthouse in Texas scrapped the screening because of “circumstances beyond our control,” while the Ohio-based Capitol Theatre and the Plaza in Atlanta said their screenings were canceled by Paramount. Paramount declined to comment.

Sony said Wednesday it has no further plans to release “The Interview,” but that has not stopped speculation that another company or maybe even Sony itself would aim for a smaller distribution sometime in the future.

Sony’s capitulation could mean that more businesses will be targeted for cyberwarfare, security experts said, warning that many companies were ripe for attack.

“I fully expect to see more actions like this against film studios or other soft targets because they have not paid attention to cyber security for so long,” said Jeffrey Carr, chief executive officer of Taia Global, a cyber security company.

Sony’s embattled executives continued efforts to undo damage to their reputation wrought by the leaking of sensitive emails from the November attack.

But Sharpton stopped short of asking for her resignation.

“The jury is still out on where we go with Amy,” Sharpton said. “We’re not going to be satisfied until we see something concrete done.”

While Rogen last week praised Pascal for having the courage to make the film, the long-time executive might be in a fight to keep her job because of that decision.

“If you look at some of the emails, you have to go back and research, and look at her discussions with the head of Sony overall in Japan. They never wanted to make this movie in the first place,” Mike Paul, crisis management consultant and president of Reputation Doctor LLC, told Reuters Insider.

(Additional reporting by Michelle Nichols at the United Nations, Ritsuko Ando in Tokyo and Jim Finkle in Boston; Writing by Mary Milliken; Editing by Grant McCool and Lisa Shumaker)