Local television in Australia reports that hostages have been taken in a central Sydney cafe where a black flag with white Arabic writing could be seen in the window. Rough Cut (no reporter narration). Video provided by Reuters Newslook

Police stand outside a cafe under siege in Martin Place in the central business district of Sydney, Australia, Monday, in what Prime Minister Tony Abbott called a reported hostage-taking incident.(Photo: Rob Griffith, AP)

Sydney, Australia was gripped with terror Monday when police responded to a reported hostage-taking siege at a cafe in the central business district.

There were conflicting reports of the number of people being held hostage.

Television and still images from the scene showed several people inside the cafe holding their hands up in the air, pressed against windows, with a visible black flag bearing what appeared to be Arabic script.

Prime Minister Tony Abbott said in a statement that local and federal police were responding to the “reported hostage-taking incident in Martin Place in Sydney.”

He called it “obviously a deeply concerning incident” and said the national security committee of his cabinet was meeting on the situation at the Lindt Cafe.

“We do not know the motivation of the perpetrator,” Abbott said later in a televised address. But he added that it may be “politically motivated” and called it “very disturbing.”

The Daily Telegraph quoted the CEO of the company that owns the Lindt Cafe as saying there could be as many as 40 to 50 people being held.

Photographs posted on social media showed people within the cafe standing at a window and holding a black flag with Arabic writing.

The Sydney Opera House was evacuated. The New South Wales parliament was shut down to the public, the Daily Telegraph reported. Streets in the area of the cafe were closed, as was a major expressway into the city, the Sydney Morning Herald reported. Public transportation was shut down, and courts in the area were locked down. Motorists were urged to avoid the downtown area.

The Daily Telegraph reported that the hostages were being forced to pace inside the cafe, and that there were reports the gunman had asked to speak to the prime minister.

New South Wales state police would not say what was happening inside the Lindt Chocolat Cafe or whether hostages were being held. But television footage shot through the cafe’s windows showed several people with their arms in the air and hands pressed against the glass.

The footage showed two people inside the cafe holding up what appeared to be a black flag with white Arabic writing on it. It was not immediately clear what the flag said. 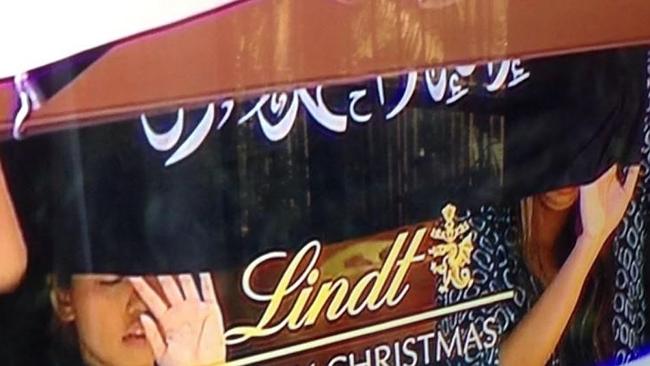 A police spokeswoman said no injuries had been reported from the incident.

The cafe is located in the heart of the city’s financial and shopping district. Streets in the area were closed and officials were asking the public to stay away. Heavily armed officers were lined up outside the cafe.