US, Cuba to restore ties after 50 years of hostility – Reuters 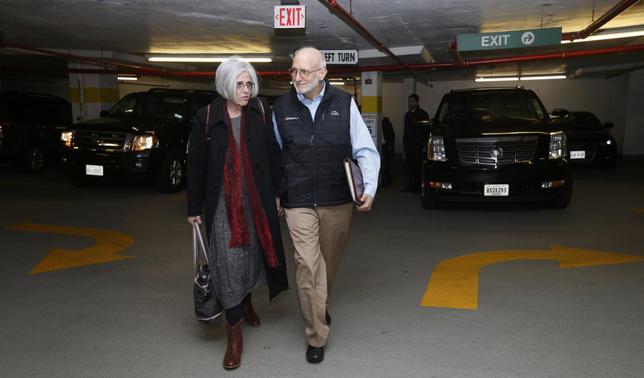 (Reuters) – The United States will restore diplomatic relations it severed with Cuba more than 50 years ago, a major policy shift ending decades of hostile ties with the communist-ruled island, President Barack Obama said on Wednesday.

Announcing the end of what he called a “rigid” policy of isolation of Cuba that had been ineffective, Obama said the United States would move toward normal ties and would open an embassy in Cuba.

Obama discussed the changes with Cuban President Raul Castro on Tuesday in a nearly hour-long telephone call. Castro spoke in Cuba as Obama made his announcement on a policy shift made possible by the release of American Alan Gross, 65, who had been imprisoned in Cuba for five years.

Gross’ case had been a block to any movement by Washington toward improved ties. Obama said Pope Francis had played an active role in pressing for his release. Francis congratulated both countries on their forging of diplomatic ties.

The policy shift will mean a relaxation in some aspects of commerce and transportation between the United States and Cuba, but it does not mean an end to the longstanding trade embargo, which needs congressional approval that Obama may face a struggle getting.

And while travel restrictions that currently make it hard for most Americans to visit will be eased, the door will not yet be open for broad U.S. tourism on the Caribbean island.

Cuba and the United States have been ideological foes since soon after the 1959 revolution that brought Raul Castro’s older brother, Fidel Castro, to power.

They have not had diplomatic relations since 1961 and the United States has maintained its trade embargo on the island, 90 miles (140 km) south of Florida, for more than 50 years. Obama said he would ask Congress to lift the embargo.

Obama will likely face resistance on this.

Although a growing number of U.S. lawmakers favor more normal ties with Cuba, those lawmakers are still mostly Democrats, and after big midterm election gains in November, Republicans will control both houses of Congress in the new year.

Senator Marco Rubio, a Cuban American Republican, said he would use his role as incoming chairman of a key Senate Foreign Relations Committee to try to block the plan and was committed to doing all he could to “unravel” it.

News of the changes rippled fast through the 1.5 million-strong Cuban American community in the United States, hailed by some who are keen to see closer ties with the island and condemned by others who have opposed any warming while either of the Castro brothers is in power.

“It’s amazing,” said Hugo Cancio, who arrived in Miami in the 1980 Mariel boatlift and runs a magazine with offices in Miami and Havana. “This is a new beginning, a dream come true for the 11.2 million Cubans in Cuba, and I think it will provoke a change of mentality here too in this community.”

Flashpoints in U.S.-Cuba hostilities included the Cuban missile crisis of October 1962 that brought the world to the brink of nuclear war. Washington’s policy has survived the demise of Soviet communism and the end of the Cold War as the United States pushes for democratic reform in Cuba.

Cuba arrested Gross on Dec. 3, 2009, and sentenced him to 15 years in prison for importing banned technology and trying to establish clandestine Internet service for Cuban Jews. Gross had been working as a subcontractor for the U.S. Agency for International Development (USAID).

The payoff for Obama was the release of Gross, whose lawyer and family have described him as mentally vanquished, gaunt, hobbling and missing five teeth.

Fidel Castro retired in 2008, handing power to his brother, who has carried out some economic reforms but maintained a one-party political system.

The three Cuban intelligence agents, jailed since 1998, are

Gerardo Hernandez, 49, Antonio Guerrero, 56, and Ramon Labañino, 51. Two others had been released before on completing their sentences – Rene Gonzalez, 58, and Fernando Gonzalez, 51. The three arrived in Cuba on Wednesday, Castro said.

For Obama, the abrupt shift in Cuba policy adds a foreign policy milestone to his presidential legacy as he enters the last two years of his eight years in office. He will be able to say he turned the page from a policy that Democratic President John Kennedy began in 1961.

At home, Obama’s move may bolster Democratic hopes of retaining the support of Latino voters as the party looks ahead to the presidential election in 2016. Republican candidates seeking to carve out some of the Latino vote may have difficulty arguing against the Cuba move.

Despite their animosity, the two countries have long been engaged on a host of issues such as immigration, drug interdiction and oil-spill mitigation.