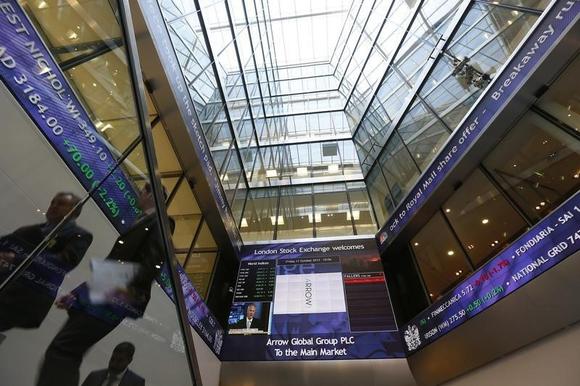 People pass electronic information boards at the London Stock Exchange in the City of London October 11, 2013.

Brent crude trimmed losses to trade just below $60 a barrel after breaking through that level in a plunge of more than 4 percent to plumb a July 2009 low. U.S. oil prices rallied abruptly to trade just above break-even on what traders said was a mix of profit-taking and positioning ahead of options expiry.

“There’s a whole lot of things going on, from the options trade in WTI to the position squaring in Brent, that’s helping oil prices get some upward traction here,” said Tariq Zahir, managing member at Tyche Capital Advisors in Laurel Hollow, New York.

European shares staged a late rebound as the ruble recovered much of the day’s losses against the dollar. Traders pointed to comments by U.S. Secretary of State John Kerry, who said Russia had made constructive moves toward possibly reducing tensions in Ukraine.

“There are many, many stocks, especially in the energy sector, that were just trading at absolute ridiculous prices to their fair market valuation. That is really what started the rally, when investors really started to come into the energy stocks,” he said.

Tumbling oil prices spurred a fresh wave of safe-haven bids for U.S. government debt, sending the 30-year yield to its lowest in more two years as investors worried about how the plunge in crude prices might harm the global economy.

The dollar hovered at its lowest level against the safe-haven yen in roughly a month.