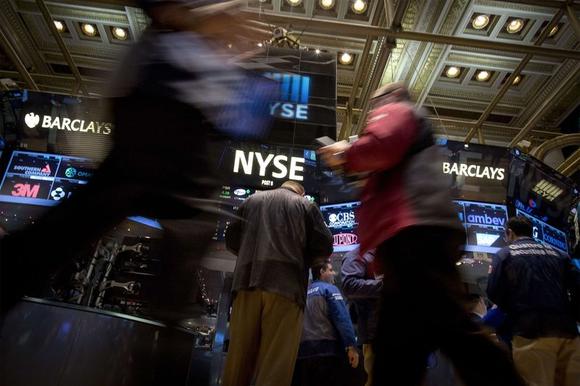 Traders work on the floor of the New York Stock Exchange December 16, 2014.

Russian stocks on the dollar-denominated RTS index .IRTS slumped 12.4 percent and sovereign and corporate bonds also retreated. The dollar rose as much as 25 percent against the ruble RUB-MCX= in spot markets, before paring gains to trade a few percentage points higher.

“If you have a deeply mono-export culture which is linked to oil, then the consequences of much-lower oil prices are quite unfortunate,” said Sebastien Galy, senior foreign exchange analyst at Societe Generale in New York.

Brent crude trimmed losses to trade just below $60 a barrel after breaking through that level in a plunge of more than 4 percent to plumb a July 2009 low. U.S. oil prices rallied abruptly to settle near break-even on what traders said was a mix of profit-taking and positioning ahead of options expiry.

European shares staged a late rebound as the ruble recovered much of the day’s losses against the dollar. Traders pointed to comments by U.S. Secretary of State John Kerry, who said Russia had made constructive moves toward possibly reducing tensions in Ukraine. [ID:nL6N0U03LD]

“We are not out of the woods yet,” Mendelsohn said. He said that attractive valuations in the energy sector turned the equity market around.

“There are many, many stocks, especially in the energy sector, that were just trading at absolute ridiculous prices to their fair market valuation,” he said.

Market participants said a policy statement from the Federal Reserve on Wednesday after a two-day meeting will show whether it widened the door for higher interest rates next year. In October, the Fed repeated that benchmark rates were unlikely to rise for a “considerable time.” [ID:nL1N0TV2FX]

Tumbling oil prices spurred a fresh wave of safe-haven bids for U.S. government debt, sending the 30-year yield to its lowest in more two years as investors worried about how the plunge in crude prices might harm the global economy.

The dollar hovered at its lowest level against the safe-haven yen in roughly a month.