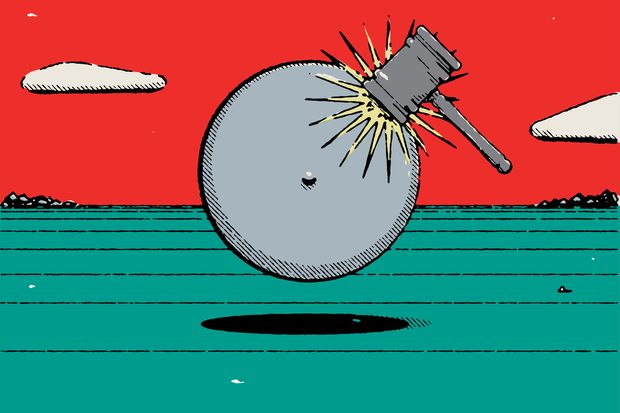 Deal Day. Stocks rallied Friday as the U.S. and China reached an agreement to halt the trade war for now, potentially paving the way to a broader deal in the future. The next round of tariffs against China won’t go into effect, and the two countries expect to sign the deal as soon as next month. Consumer sentiment unexpectedly rebounded in October, while oil prices rose after reported attacks on Iranian crude ships. In today’s After the Bell, we…

Buy the Rumor, Buy the News

Stocks opened higher Friday morning after President Donald Trump said in a tweet that “Good things are happening at China Trade Talk Meeting” and the two countries are sharing “Warmer feelings than in recent past.”

Then, after meeting with China’s lead trade negotiator Liu He in the Oval Office in the afternoon, Trump announced that the two countries have reached a “substantial phase-one deal,” which reportedly addressed intellectual property, financial-services concerns, and China’s purchases of American agricultural products.

Treasury Secretary Steven Mnuchin also announced that the White House has scrapped a new round of tariffs on Chinese imports, which were slated to go into effect Oct. 15.

It might take a few weeks to put the deal into writing. President Trump and Chinese President Xi Jinping will likely sign the pact as soon as next month when they attend the APEC conference in Chile. A partial agreement could lay the groundwork for a more complete pact, or the “phase two,” that could start almost immediately after that.

Still, with the positive expectations largely priced in, stocks didn’t rise further on the news, and even slid a bit toward the end of the day.

University of Michigan’s consumer sentiment survey rose to a three-month high of 96 in October, well above the 93.2 reading in September and economists’ previous consensus. The reading reflects consumers’ easing concerns about the trade war with China and little worry about President Trump’s impeachment headlines.

Sentiment toward the current health of the economy rose to the highest level since the end of 2018, but expectations for the next six months barely increased, reflecting concerns about slower economic growth going forward.

Still, consumers’ expectations of income rose to the highest level in two decades. That—along with the lower interest rate—is a positive sign for strong consumer spending, which can partially offset the weakness in business investment. Many Americans have already taken advantage of the lower rates to buy a home or a new car.

Oil prices rose on Friday after Iranian officials reported that a ship carrying crude was attacked in the Red Sea near Saudi Arabia. That added to tensions in the region following the attack on Saudi Arabia’s key oil infrastructure last month. Worries that unrest in the region could threaten global supply sent Brent crude futures, the international benchmark, 2.39% higher to settle at $60.51 per barrel, while West Texas Intermediate futures increased 2.15% to $54.70 per barrel.

Write to Evie Liu at evie.liu@barrons.com