Cramer's week ahead: The bond market is 'begging' the Fed to slash rates

The “Mad Money” host based his reasoning in the the economy is “inherently deflationary,” in part due to labor-saving technology crimping wage growth. The U.S. economy added 130,000 jobs in August, short of the projected 150,000, which he said gives Fed Chair Jerome Powell “a lot more leeway to cut interest rates, if he wants to.”

The Dow Jones Industrial Average advanced nearly 70 points and the S&P 500 moved less than 0.1% during the session. The Nasdaq Composite declined 0.17%.

In a tweet, President Donald Trump continued to rail on his hand-picked Fed chief to cut rates, saying he agrees with Cramer’s assessment.

“Love him or hate him, Trump is absolutely right on this issue, and the bond market is practically begging Powell to slash-and-burn rates back down to 1% here,” Cramer said. “Even if the Fed chief won’t listen to the president, he should certainly listen to the bond market, which has made it crystal clear that he raised rates too fast and now they got to come down almost immediately.”

U.S. Treasury bonds, with the exception of the 30-year bond, are all yielded less than 2% as of Friday.

Here’s what’s on Cramer’s radar in the week ahead: 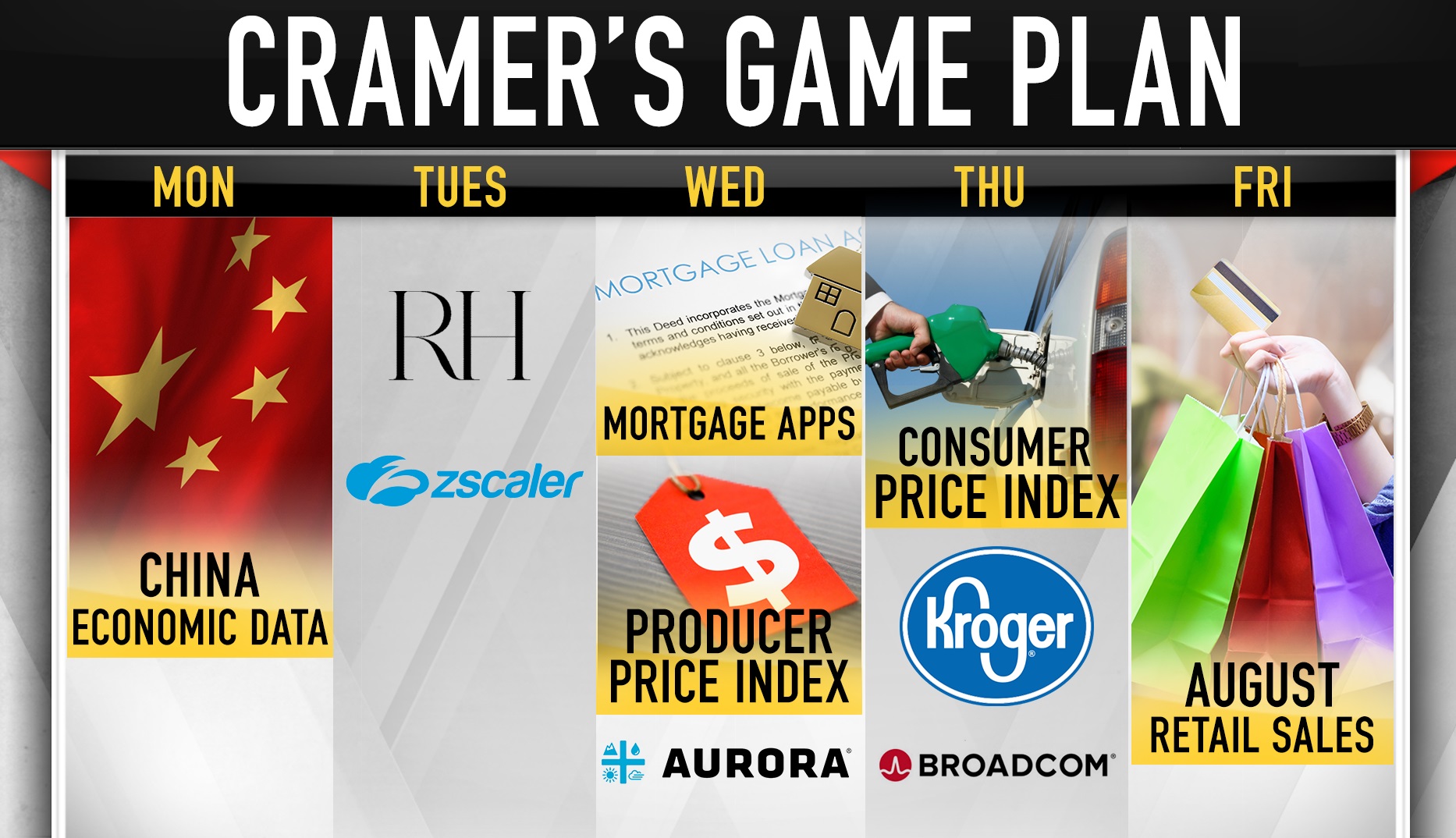 The public will get some insight into China’s economy when the country releases consumer and producer data for the month of August. The Consumer Price Index is an inflation gauge that considers price changes for goods and services, while the Producer Price Index measures cost changes on the production side.

While he is skeptical of information that the Chinese government releases, Cramer said the numbers will help decipher who has the upper hand in the trade war with the U.S.

“If they’re not-too-hot, not-too-cold, well that might mean they’ll be less willing to make concessions [and] this thing’s going to drag on,” he said.

RH, the rebranded Restoration Hardware, reports earnings after the bell. The furnishing retailer delivered top-and-bottom line beats and raised outlook in its June report. RH is guiding $2.65 to $2.72 earnings per share. Analysts are expecting to see earnings of $2.69 per share on Tuesday, according to FactSet.

Zscaler, a cloud-based cybersecurity play, presents earnings after the market closes. Wall Street is looking for earnings of 1 cent per share.

“I’m also betting we get a weak producer price index figure, and that’s good,” he said. “It gives more ammo to the doves on the Federal Reserve who want to lower rates ASAP, like they should.”

Aurora Cannabis is scheduled to report earnings after the market closes. After it turned in two consecutive quarters of losses, Wall Street expects another 5 cent loss per share in the weed company’s fiscal fourth quarter, based on FactSet.

“I’m starting to think that the pot stocks have become too hated,” the host said.

Consumer Price Index in the U.S. could be “tame,” another reason for an interest rate cut, Cramer said.

Kroger reports earnings in the morning.

“If you want to know how the CPI could be low, just listen in on Kroger’s conference call,” the host said. “This supermarket chain simply cannot raise prices to save its life … because the world’s dominated by” Amazon, Walmart, Costco and Target.

Broadcom is out with earnings from its July quarter at the end of the trade day. Cramer is keeping his eye on it on the premise that it could be the “most important earnings call of the week” in large part because of its exposure to China. The semiconductor company is also paying more than $10 billion for Symantec‘s enterprise business. Wall Street is estimating a $5.14 EPS, according to FactSet.

“Broadcom’s CEO Hock Tan is both wily and tough, and boy does he like to buy his stock back,” Cramer said. “I bet he delivers a terrific quarter.”

U.S. retail sales rose 0.7% in July. The public will get an updated look at consumer confidence and the shopping trends from bricks to clicks when the Commerce Department releases the latest retail data. Cramer is expecting numbers to be weak across the board, except at companies in his WATCH list — Walmart, Amazon, Target, Costco and Home Depot.

WATCH: Cramer maps out the week