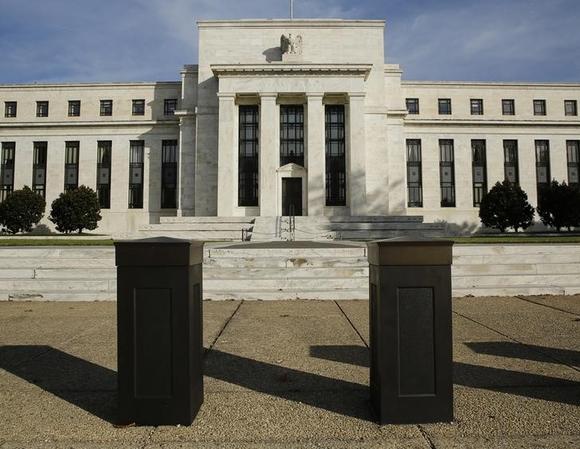 The United States Federal Reserve Board building is shown behind security barriers in Washington October 28, 2014.

Brent LCOc1 neared $60 per barrel at its session low and U.S. crude CLc1 dipped under $56. Both have fallen nearly 50 percent from highs in June.

The S&P 500 was trading below its 50-day moving average for the first time since October 28.

“The continued free fall in crude is the main thing here,” said Uri Landesman, president at Platinum Partners in New York, adding the S&P 500 could test 1,750.

“The irony of this (decline) is you could argue the cause is going to be good news for the economy,” he said, citing lower gasoline prices as a boost to consumer spending.

At its session low, the S&P 500 was down 4.7 percent from its record intraday high hit earlier this month and was up 8.8 percent from a low hit in October.

U.S. manufacturing output recorded its largest increase in nine months in November as production expanded across the board, pointing to underlying strength in the economy. However, the New York Federal Reserve’s gauge of manufacturing turned negative in December for the first time in almost two years.

Shares of pet supply retailer PetSmart (PETM.O) rose 4.5 percent to $81.19 after it agreed to be bought by a private equity consortium led by BC Partners Ltd for $8.7 billion, in the largest leveraged buyout of the year.

Workers at Amazon (AMZN.O) warehouses in Germany began a three-day strike for better pay and work conditions as the online retailer raced to ensure holiday orders are delivered on time. Amazon shares were down 0.2 percent at $306.79.