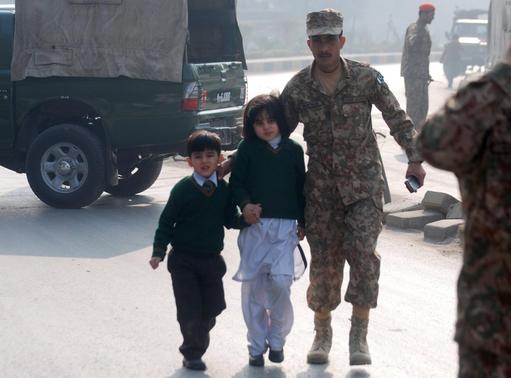 (Reuters) – At least 84 children were killed in Pakistan on Tuesday when Taliban gunmen stormed a military-run school in the city of Peshawar, taking hundreds of students and teachers hostage in the bloodiest insurgent attack in the country in years.

Troops surrounded the building and an operation was under way to rescue the remaining children, the army said. A Reuters journalist at the scene said he could hear heavy gunfire from inside the school.

Pervaiz Khattak, Chief Minister of Khyber Pakhtunkhwa, the province of which Peshawar is the capital, said 84 children had been killed.

“In CMH (Combined Military Hospital) there are around 60 and there are 24 dead in Lady Reading (hospital),” he told local television channels.

It was not immediately clear whether some or all of the children were killed by the gunmen or in the ensuing battle with Pakistani security forces trying to gain control of the building.

An unspecified number of children were still being held hostage in the school, a provincial official said, speaking some three hours after the attack began.

The Pakistani Taliban, who are fighting to topple the government and set up a strict Islamic state, have vowed to step up attacks in response to a major army operation against the insurgents in the tribal areas.

They have targeted security forces, checkpoints, military bases and airports, but attacks on civilian targets with no logistical significance are relatively rare.

In September, 2013, dozens of people, including many children, were killed in an attack on a church, also in Peshawar.

“WE WANT THEM TO FEEL THE PAIN”

“We selected the army’s school for the attack because the government is targeting our families and females,” said Taliban spokesman Muhammad Umar Khorasani. “We want them to feel the pain.”

The army said in a statement that many hostages had been evacuated but did not say how many.

“Rescue operation by troops underway. Exchange of fire continues. Bulk of student(s) and staff evacuated. Reports of some children and teachers killed by terrorist,” the army said in a brief English-language statement.

Prime Minister Nawaz Sharif condemned the attack and said he was on his way to Peshawar.

“I can’t stay back in Islamabad. This is a national tragedy unleashed by savages. These were my kids,” he said in a statement.

“This is my loss. This is the nation’s loss. I am leaving for Peshawar now and I will supervise this operation myself.”

Military officials at the scene said at least six armed men had entered the military-run Army Public School. About 500 students and teachers were believed to be inside.

“We were standing outside the school and firing suddenly started and there was chaos everywhere and the screams of children and teachers,” said Jamshed Khan, a school bus driver.

One student inside the school at the time of the attack told a private television channel: “We were in the examination hall when all of sudden firing started and our teachers told us to silently lay on the floor. We remained on the floor for an hour. There was a lot of gunfire.

“When the gunfire died down our soldiers came and guided us out.”

Originally the Taliban said the attackers, including a number of suicide bombers, had been instructed not to target children and shoot only adults.