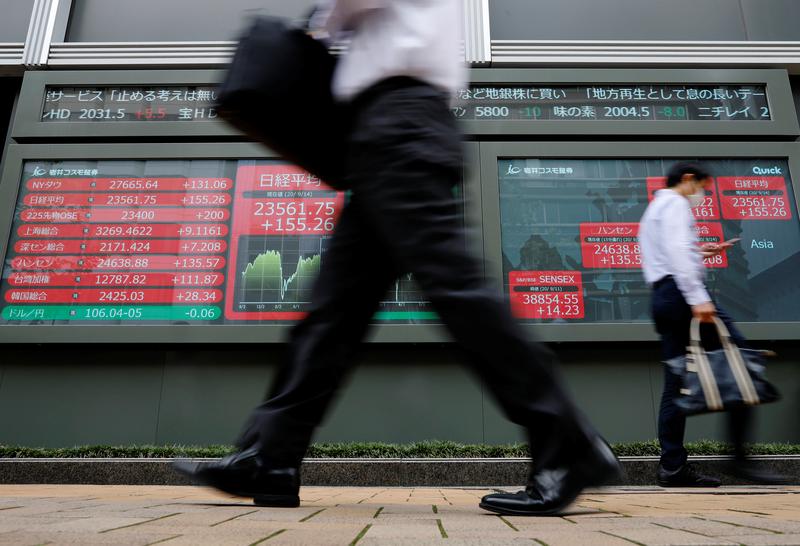 NEW YORK (Reuters) – Asian shares were set for a mixed open on Wednesday as investors awaited the Federal Reserve’s view on the economy at the end of its policy meeting, although upbeat Chinese and U.S. economic data is likely to give sentiment a tailwind.

Global equities markets rallied on Tuesday, first on data that showed China’s industrial output and retail sales picked up, and later on an increase in U.S. factory production.

Commodity-linked currencies such as the Australian, New Zealand, and Canadian dollars gained after the positive Chinese data.

But with U.S. lawmakers at an impasse over a new stimulus package, concerns about the economic recovery remained and investors’ attention shifted to the two-day U.S. Federal Reserve meeting, which started on Tuesday.

“There is some expectation that with the U.S. Congress unwilling/unable to agree to a new fiscal package, monetary policy may need to step in to fill the void,” NAB analyst Tapas Strickland said in a note. “Accordingly markets will be focused on any changes to forward guidance and to any balance sheet adjustments.”

The Bank of Japan and the Bank of England announce their respective policy decisions on Thursday.

Apple Inc retraced earlier gains after its product event, which included the roll-out of a new virtual fitness service and a bundle of its subscriptions into Apple One. The stock, which often dips after a run-up prior to the event, closed up 0.2%.

U.S. retail sales figures from August will also be in focus on Wednesday.