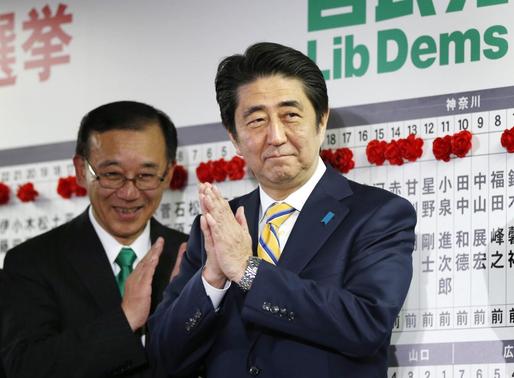 But doubts persist as to whether Abe, who now has a shot to become a rare long-lasting leader in Japan, can engineer sustainable growth with his “Abenomics” recipe of hyper-easy monetary policy, government spending and promises of deregulation.

“We heard the voice of the people saying ‘Move forward with Abenomics’,” Abe told a news conference at his ruling Liberal Democratic Party (LDP) headquarters, adorned with giant posters of the premier and his campaign slogan “This is the only path”.

“I want to boldly implement the ‘Three Arrows’,” Abe said, adding he would compile stimulus steps before the year’s end and ask business leaders to boost wages, which have not kept pace with rises in consumer prices.

The LDP and its junior partner, the Komeito party, won 326 seats in Sunday’s poll to maintain a two-thirds “super-majority” that smoothes parliamentary business.

That was unchanged from the coalition tally before the poll, although the LDP itself slipped slightly to 291 seats from 295.

Many voters, doubtful of both the premier’s “Abenomics” strategy to end deflation and generate growth and the opposition’s ability to do any better, stayed at home.

Turnout was an estimated record low of 53.3 percent, well below the 59.3 percent in a 2012 poll that returned Abe to power for a rare second term on pledges to reboot an economy plagued by deflation and an ageing, shrinking population.

In a sign of the fragility of Abe’s mandate, the LDP won 75 percent of the seats in single-member districts that account for 295 lower house seats with just 48 percent of the vote, data in the Tokyo Shimbun metropolitan newspaper showed.

But with the mainstream opposition still weak, any resistance to Abe’s policies will likely come from his allies in the dovish Komeito party, which increased its seats to 35 from 31, and from inside the LDP itself, should the economy falter.

Tokyo’s Nikkei share average closed down 1.57 percent on the widely-expected election results after a weak performance Friday by the U.S. stock market, although analysts said the outcome was positive for shares and negative for the yen in the near term.

Abe said he would knuckle down on his “Third Arrow” of reforms in politically sensitive areas such as the highly protected farm sector, although he did not mention the labor market deregulation many experts say are key.

“I think this big election win will give us strength (for reforms),” he said.

Hopes for Abenomics were hit when Japan slipped into recession in the third quarter following an April sales tax rise and recent data suggest any economic rebound is fragile.

Abe decided last month to put off a second tax hike to 10 percent until April 2017, raising concerns about how Japan will curb its huge public debt, the worst among advanced nations.

“Between now and the delayed tax increase, we need to revive the economy and find a path to fiscal rebuilding,” said LDP lawmaker Shinjiro Koizumi late on Sunday.

“If you think about it in that way, even though we have won, there is no room here for celebrating.”

Abe, whose support has now sagged well below 50 percent, called the election after just two years in office to strengthen his grip on power before tackling unpopular policies.

That includes restarting nuclear reactors taken off-line after the 2011 Fukushima disaster and a security policy shift away from post-war pacifism. Abe said he would strive to get public understanding to revise the pacifist constitution.

The LDP-led coalition victory could ease Abe’s path to re-election in a party leadership race next September, boosting the likelihood, but by no means guaranteeing, that he stays in power through 2018.

DPJ leader Banri Kaieda, criticized by many in his own camp for lack of charisma, lost his seat.

The party’s limp performance has raised concerns Japan is returning to one-party dominance that characterized politics for decades – although some analysts said the poor showing of rival mini-parties suggested the opposition could begin to coalesce around the DPJ.

The Japan Communist Party won 21 seats, more than double its strength before the election, gaining support from protest voters loath to back the Democrats.